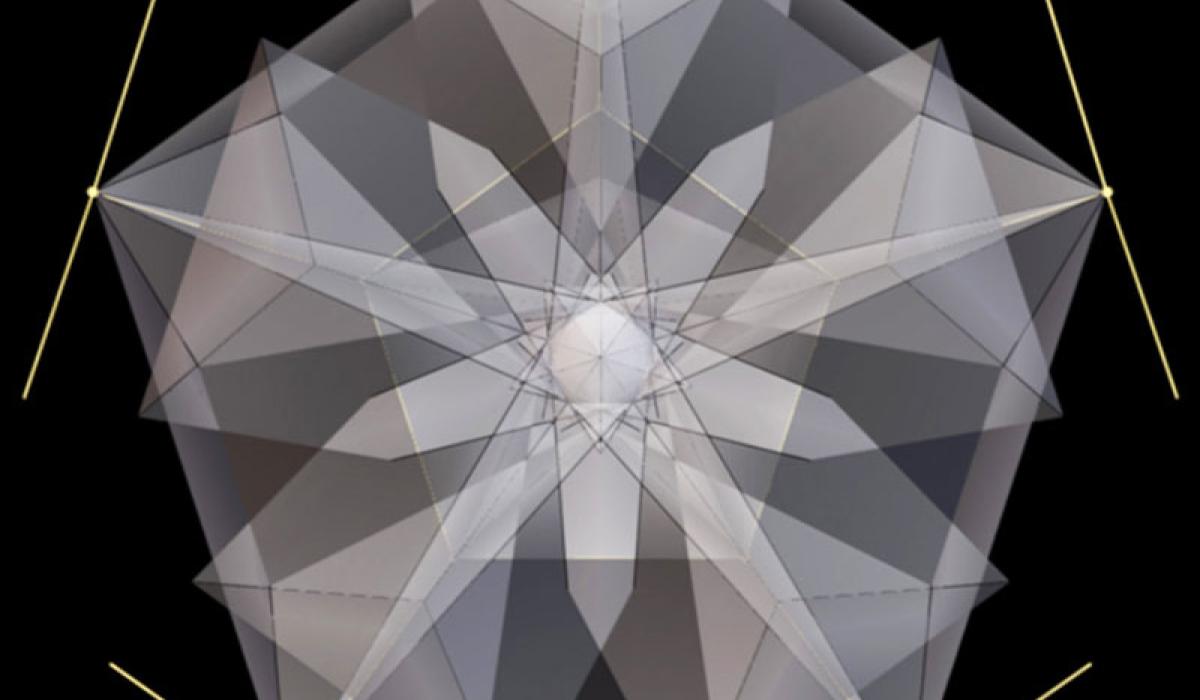 A form which frames nothing was found in the shape of 5-dimensional space by this issue’s featured artist: the Vienna based geometer, art researcher, philosopher and science communicator Renate C.-Z.-Quehenberger. Her ontological research, which combines philosophy with geometry is inspired by Gregory Bateson and Heinz von Förster’s quest for “the pattern which connects.” (1)

Her associated contributions are in both art and science contexts: Her visualizations include 3D animated geometry films, installations and objects exhibited in art spaces and museums. Quehenberger’s investigations have led her to the development of a new 3D animated geometry for higher mathematics for the visualization of quantum phenomena (as executed in her art research project “Quantum Cinema a digital Vision.” (2)

In 2005 Renate Quehenberger found the 3D representation of the Penrose Kites & Darts Tiling (named epitahedron E±) which she only considers as a re-discovery of a construction method for the dodecahedron, known as Plato's 5th element, (3) relevant for Henri Poincaré’s homology sphere, (4) and the Planck scale. (5)

Quehenberger’s artwork presented here connects the ancient theory of everything with 20th century physics by following the truly Platonic aim for visualizing the ideal world by means of digital arts. Plato’s triangles cradled by the wet-nurse-of- becoming becomes alive in the higher dimensional realms of quantum physics and Spencer-Brown’s circles gain a new relevance.

1. See her thesis, On the Hermeneutics of the Penrose Patterns, where she hypothesizes that the geometry of 5-dimensional space is the ontologic basis that existence precedes.
2. Quantum Cinema - a digital vision, Art research project with Peter Weibel including the quantum physicist Helmut Rauch, the philosopher Elisabeth von Samsonow and the geometer Helmut Stachel, funded by the Austrian Science Fund, FWF No. AR 35-G21
3. (2014). A newly discovered Heptahedron named Epitahedron. Symmetry: Culture and Science, 25(3),177–192
4. Visualizing Poincaré’s dream. Paper presented at SEOUL ICM 2014, International Congress of Mathematicians, Seoul. August 18, 2014
5. A Proposal for a Psi-ontological model based on 5-dimensional Geometry, QCQMB Workshop: Quantum Contextuality in Quantum Mechanics and Beyond, Prague 2017

https://imaginary.org/users/renate-quehenberger
Back to Issue:
Laws of Form